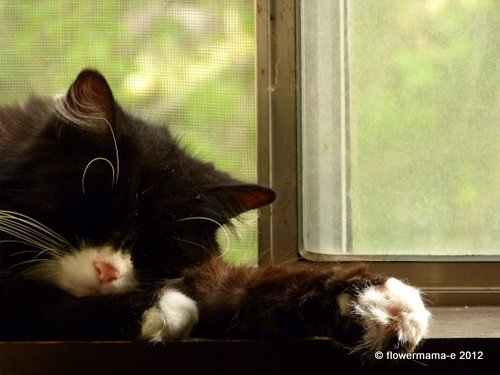 It’s been a sad week. Our sweet cat Percy passed away very early Tuesday morning.  As a result I’ve not felt like doing much and find that I’d rather sleep so that I can stop myself from thinking and just rest.  I guess I’ve also been wanting to sleep a lot because taking care of a sick kitty, then providing hospice care for her, and being sad are pretty tiring things.

I first became really concerned about Percy this past Saturday night when she began acting strangely (if only I had been paying more attention and realized sooner that she felt badly. . .  I feel so guilty for not noticing sooner).  That evening she came downstairs to the kitchen meowing pitifully. I didn’t know what was wrong so I offered her fresh water, two different bowls just in case she didn’t like the shape of one, but she didn’t drink any. I offered her soft food from a can, which she usually loves.  Our other cats happily ate the food I gave them, but she didn’t eat any of it.  I hoped she refused it because perhaps she didn’t like the flavor I had given her.

I walked with her when she went back upstairs (she preferred being upstairs), and I looked around for a dropper to see if I could get her to drink some water that way, because she seemed thirsty since she was making a sound with her tongue as if her mouth might be dry.  So I found a dropper and gave her some fresh, cold water from the sink.  She lapped it up, and I felt relieved.

When I tried to give her water during the night, she didn’t want it as much.  The next morning she wanted it even less.  After church on Sunday morning we bought a different flavor of canned food to offer her, one she had enjoyed in the past, and she refused to eat it as well.  I kept trying to give her water that day.

One of the saddest and most difficult things for us to see was that she wasn’t herself.  Her personality changed so dramatically.  Her sweet face used to light up when she would see us.  My daughter put it this way:  she would meow and look at her with a smile!  But when Percy became so sick this past weekend, that changed so quickly and when we looked at her she would turn her face away, and any meows she had were very sad. 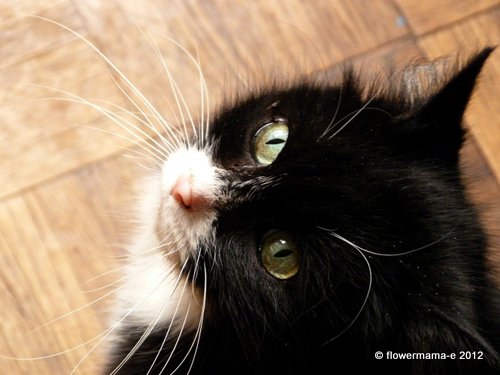 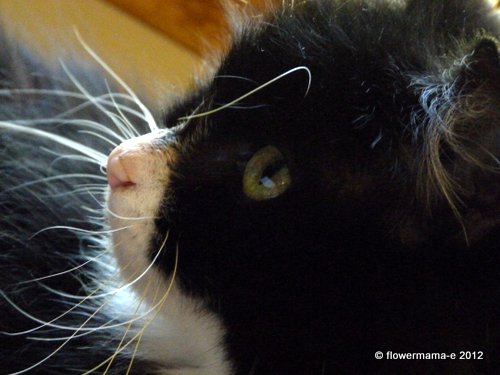 The next morning my younger daughter and I took her to the vet.  We were there for about an hour and a half. They helped her warm up, as her body temp was too low, and gave her iv fluids while we were there. The prognosis didn’t look good.  From her symptoms, the doctor thought she likely had kidney disease that was more advanced.  The doctor wanted to have tests run on her to see if that was indeed the case.  We couldn’t afford to put her in the hospital, but since we had successfully helped one of our cats pull through in the past by caring for him at home, I decided to try again.  The doctor agreed that our kitty was worth a shot.

We went home with special cat food, syringes we could use to try and feed her, an antacid, anti-nausea medication, painkillers, and iv fluids for our kitty.  When I first put her on the ground after carrying her upstairs, she seemed like she might be interested in some food, so I felt a spark of hope.  It turned out that she never did eat any of it on her own.  Later I tried quite a few times to give her some liquefied food in a syringe, but it was hard.  I’d squirt a little in her mouth, and she swallowed some of it, but she wasn’t at all interested.

She moved around a little, but less and less as the day went by, and her legs were getting weaker and less able to hold her up.  At one time earlier in the day I carried her with me downstairs and tried to get her to sit on my lap while I read on the couch, but she jumped down and weakly tried to walk away, so I quickly picked her up and carried her back to the room she wanted to be in upstairs.

We still had a small bit of hope even as the evening came.  I gave her iv fluids again, and gave her more painkiller, and tried to make her comfortable.  We had the heat turned up to help keep her warm.  We were visiting her often, sitting with her, and giving her lots of love and attention.

The next morning she was even more lethargic.  I knew she would most likely not be going to live.  It’s so hard to give up hope, though.  I gave her iv fluids again.   She perked up for a short bit, but then quickly went back to the way she had been. I told my kids that I was going to make an appointment to have her put to sleep.

I called and made an appointment, but a few of my children were feeling so troubled by that, and our cat seemed so still and quiet that we thought she might pass on her own soon, plus I had the painkillers the vet had given me the day before and felt I could use them to make Percy comfortable, so I called and with mixed feelings and uncertainty, not wanting her to suffer needlessly and hoping I was making the right choice, I canceled her set appointment with death.

I made a special soft bed for her near the heater and to help keep her warm I laid an old sweatshirt of my younger daughter’s which said “Princess” over her body.  The day went by slowly.  The time her appointment had been came, and she was still alive.  My children visited her often that day, sometimes taking turns visiting with her so she’d have someone with her much of the time.  They didn’t expect her to live all that day, because her breathing was so slow and so soft and she was so still, but she hung on, and she was surrounded by so much love during that time.

My kids felt grateful to have had that extra day with her, time to hold her and talk with her and pet her and love her, time to begin letting go.   We went to bed that night knowing that her time would come soon, not wanting her to die, but yet not wanting her to suffer.  I told them that if she were still alive in the morning, I would probably set another appointment.  None of us wanted to have to do that.

I had set an alarm to make sure I got up, and after the alarm when off at a little after one o’clock that morning, I went to check on her.  I walked in the room, and she was very still. I laid my hand on her chest and didn’t feel her breathing or a heartbeat, but I thought her body still felt a little warm.  She wasn’t stiff yet, and I felt again to make sure she wasn’t breathing.  I think I probably missed her passing by a short amount of time.  I wished I could have been with her.  I was glad she was now in complete peace. 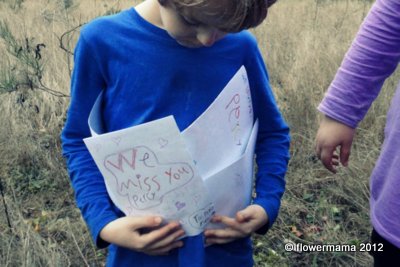 Holding cards they made for Percy to bury with her 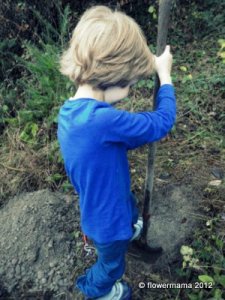 We had a funeral for her in the afternoon and buried her on our property near another cat, Myrtle, who died a few years ago.  A tree had grown up, and we were unable to find the exact spot where Myrtle was buried.  We felt bad about that and to make sure we could always find Percy’s grave, we tried very hard to mark it clearly.  My younger children found some bamboo sticks and tied them together into the shape of a big cross. We also had stone markers we painted to place on her grave.

It took quite awhile for me to dig the grave, the ground was so hard and rocky.  My littlest wanted to help (his picture is to the left).  After it was finished we had the funeral, placing the cards my children had made for Percy with her, and we shared remembrances of good things we remembered about Percy, and told her good-bye and how much we loved her.  Then we buried her and placed the markers, and prayed.  We said our last good-byes and walked back to our house. 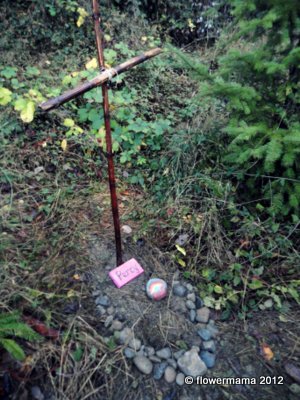 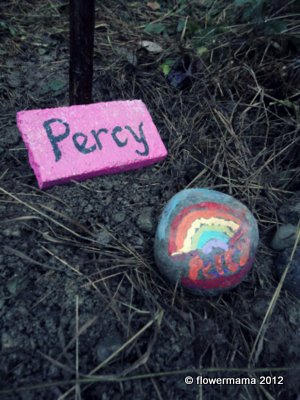 I'm a SAHM & have been married for 26 years. DH and I have 4 kiddos, age 22 down to age 13, and we are unschooling-ish, AP parents who strive to use Grace-Based Discipline. I have been vegan for 16+ years for ethical, ecological, & health reasons. Also, I love to run and swim. I've done one 50k and would love to do another one in 2018. I'm a Nuun and Skirt Sports Ambassador.
View all posts by Jeri Carr →
This entry was posted in Our Cats and tagged cat. Bookmark the permalink.